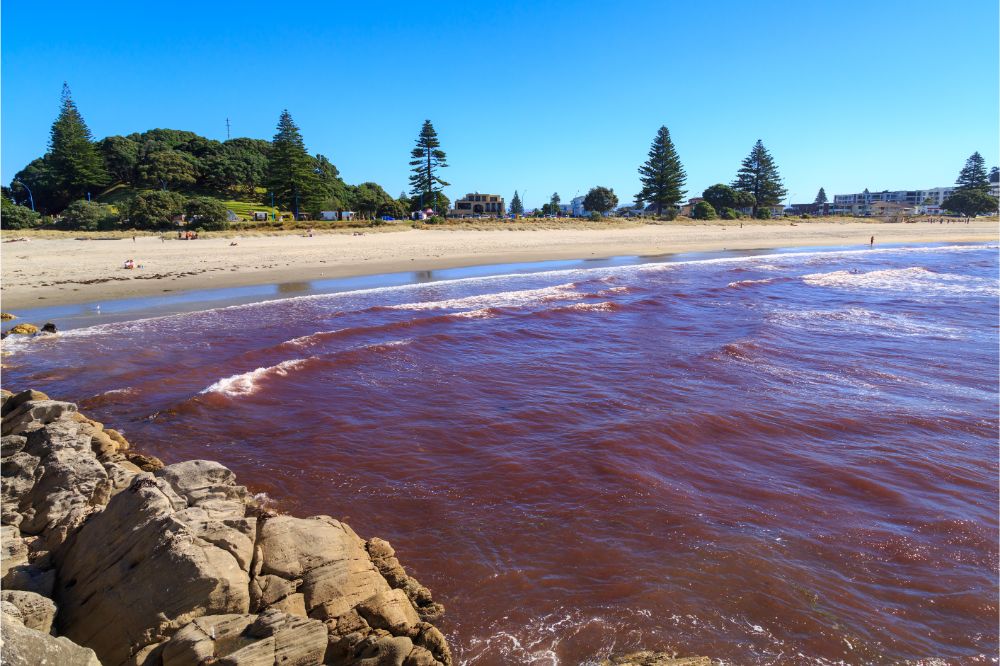 What is a red tide on Southern California beaches

Every once in a while, you may hear on the news or read a headline covering the dark red tides that have come in on the southern California beaches. This beautiful spectacle is actually not that uncommon, and just like those other articles, we'll cover just what this marvel is and tell you everything you need to know about it. So without further ado, what even is the red tide that sometimes appears on the beaches of southern California?

What Causes the Red Tide?

The red tides that appear offshore of southern California are a naturally occurring phenomenon. During the day, beneath the hot Californian sun, millions of a species of dinoflagellate phytoplankton rise to the surface, aggregating in large clouds, making the water appear to have a ruddy, reddish-brown hue.

They are so well associated with the waters of southern California because the location presents the perfect climate for it to survive and thrive, as it prefers the warmer, calmer waters. This causes it to bloom as it rapidly reproduces, which creates a large volume of cell mass within this localized area.

The name of this species is Lingulodinium polyedra. This species of phytoplankton is well known for its bioluminescence, and if you thought that the red-brown waters seen during the day was a sight to behold, then you're in for a treat. After a day of photosynthesis, the phytoplankton remain in the waters throughout the night, giving off a striking blue color that attracts many people from all over to come and watch the waves rise and fall.

Is The Red Tide That Unique?

Red tides appear around the world, wherever the water is relatively calm and pretty warm. They also come in various colors, from the striking reds you see in California to browns, burgundies, and even yellows. Different phytoplankton species have different colors, but the colors are there to attract and absorb light for photosynthesis.

That being said, it doesn't appear and stick around for that long. It can stick around for anywhere from a few days to a few months, depending on the conditions of available sunlight, food, the change in water temperature, wind and surf conditions, and, of course, human interaction.

Is The Red Tide Dangerous in Any Way?

The particular species that appears most around the beaches of southern California, Lingulodinium polyedra, is not a species that produces any toxins such as paralytic shellfish poisons and domoic acid. That being said, not all phytoplankton are safe to interact with, and there is also the concern that our toxic waste that makes its way into the ocean has affected the blooming of phytoplankton, creating and spreading more toxins throughout the coasts. For this reason, it's always best to avoid interacting with it and assume it is toxic until proven otherwise.

The California Department of Public Health accepts volunteers in assisting their monitoring of the coast for these dangerous forms of phytoplankton. The phytoplankton also has a relationship with the local shellfish in the area, which significantly benefits in assessing hazardous toxins. They can routinely monitor the shellfish for the presence of dangerous substances.

This also means that the locally sourced seafood may not actually be safe, so be sure to keep up to date with the news on quarantines and health advisories when it comes to fishing and harvesting in the area. The creatures most likely to be affected include different forms of shellfish and filter-feeding organisms, such as mussels and oysters, clams, scallops, and the phytoplankton can also make its way into crabs, lobsters, anchovies, and sardines.

How Can The Red Tide Be Dangerous?

The effects of toxic phytoplankton can be lethal and should not be taken lightly. The collection of millions of cells can produce a high amount of nerve toxins in seafood. The scariest part is that the toxins can build up without there necessarily being a visible red tide, as there simply needs to be the presence of these microscopic lifeforms.

When nonlethal - and even in nontoxic forms of phytoplankton - people have reported irritation in the eyes, mouth, and throat. You may also develop flu-like symptoms. Even when nontoxic, the phytoplankton's presence changes the surrounding waters' chemical composition, which causes this irritation in humans who interact with it during the bloom.

The red tide is a striking and beautiful display of phytoplankton rising from the depths of the ocean en masse. It's a sight to behold, but one that should be seen from a distance as we recommend not getting too close - at least until it's confirmed for sure that it's safe and you won't suffer adverse side effects.