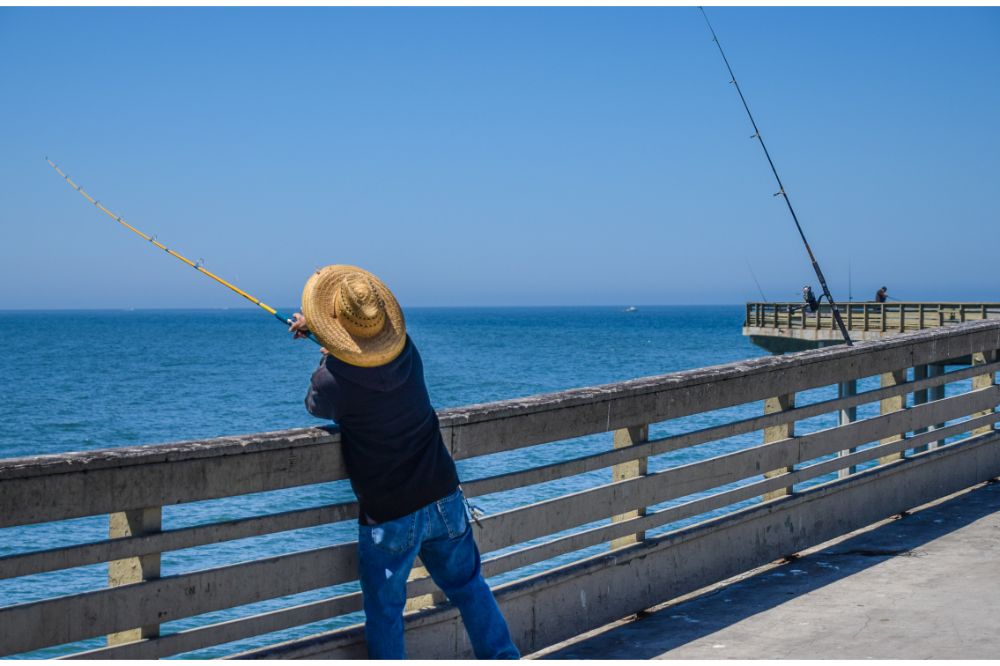 One of the most enjoyable activities for an angler is fishing from a pier. Pier fishing may put you in the middle of some genuinely magnificent angling grounds, rivaled only by a trip on a fishing charter. As appealing as that may sound, there's much more to this strategy for angling than casting a line and hoping for a nibble. We decided to compile a list of important pier fishing techniques to make your task easier and more effective.

In this article, we will be showing you some of the best techniques you can employ to make your pier fishing successful.

Table of Contents
Use A Ledger Rig
Cast Across The Current
Watch Other Anglers
Use Berley
Use Bright, Heavy Jigs At Night
Conclusion

Use A Ledger Rig

A ledger rig is an effective way to catch a wide variety of fish. It works best when you are fishing in the surf but can be used around jetties, piers, and rocks. You will need three rods for this style of fishing: one with a sinker and hook, another with a weightless hook, and finally, one with no weight or hook at all.

The most important part of your ledger rig setup is the split shot connected to your mainline between two swivels—this will allow you to control how deep or shallow your bait sits in the water column based on how tight or loosely you set it. Then tie on your leader line (which should be as long as possible), followed by an up-eye hook (#6 size). If necessary, add additional hooks below each other ("jumping").

Next, add any number of split shots onto each leader line until the desired depth has been reached—make sure there's enough space between each shot so that nothing gets tangled up! Finally, attach a snap swivel anywhere along the leader line so that all components can easily be separated for storage purposes later on.

Cast Across The Current

The cast across the current technique is probably the most common method for pier fishing. Cast your rod and reel in slowly, allowing your lure to drift downstream with the current. As you get closer to shore, begin reeling more quickly until you're back at the end of your line. Once there, cast again and repeat this process until you reach the end of your pier.

This technique can be very effective — especially if other people are fishing around you. Because fish tend to follow their food sources into deeper water (which means closer proximity for them), they may be less wary if they think something might be following along behind their bait as well!

This may sound weird, but it's an extremely useful tip. You'll see techniques you've read about being actively practiced. When you are out fishing and see another angler catch a lot of fish, it is only human nature to want to try what they're doing. But don't do it! You will only be wasting your time. Instead, watch them carefully and learn from their mistakes. There is no good way of learning fishing except by making your own mistakes—and then watching them happen again! You can learn from them in advance and make sure they don't happen again next time.

Also, keep in mind that when an angler has caught several fish in close succession, they may become complacent or lazy about baiting up each hook properly with the appropriate bait for that particular species of fish.

A great way to attract fish is by using berley. Berley is a mixture of fish parts, oil, and water that you can purchase at your local fishing store. If you have time, boiling the parts for about 15 minutes will make them more palatable to fish. You can also use canned tuna or sardines as an alternative.

When fishing in deep water, it's often necessary to use a sinker instead of tying a line on the weight and letting it go down into the water. This is so that when you reel up your line, it doesn't get stuck on anything underwater - especially if there are rocks or coral around!

Use Bright, Heavy Jigs At Night

Nighttime is an ideal time to fish because fish are more active and easier to catch. But what kind of gear should you use?

Pier fishing is an art that you should take the time to learn. It's not as easy as it looks, and many techniques can make or break your day. This guide has gone over some of the best fishing techniques for pier fishing.

First things first: do your research! This includes learning about local regulations, finding out about nearby reels and lures (and where to buy them), and reading about what kinds of fish live in your area.

Once you have all this information under your belt, take some time to practice at home before hitting the water so that when you get out there, all those hours spent practicing won't go to waste! It would be best to consider bringing a friend along for moral support because pier fishing is more fun with someone else around.